No one realized at the time, but the 1977 appearance of Jesus Christ on a flour tortilla set the international standard for miracle sightings. Once confined to obscure grotto appearances, the Tortilla was the crossover miracle that put God in the Extra Value Meal of the average American.

Now, no object is too outrageous for an Almighty (or Virgin Mary) cameo. He's materialized on a Pizza Hut billboard in a plate of spaghetti; on a bowling alley chimney; reflected from a porch light onto a car bumper (until the light was turned off and the car moved); on a diner place mat; and even on a dead priest's shoe.

But the Miracle Tortilla was the first to fully wrap around the collective pop subconscious.

In October of 1977, Maria Rubio was rolling up a burrito for her husband Eduardo's breakfast, when she noticed a thumb-sized configuration of skillet burns on the tortilla that resembled the face of Jesus. Needless to say, Eduardo went hungry that meal as Maria told family and neighbors of the miraculous event. It happened in the small town of Lake Arthur, New Mexico, 40 minutes south of Roswell.

Despite the braying of scientists and skeptics, the Holy Tortilla quickly developed a solid fan base. By 1979, over 35,000 people had visited, bringing flowers and photos of sick loved ones.

Mrs. Rubio quit her job as a maid to attend full-time to the hastily constructed "Shrine of the Holy Tortilla" in her home. When away, she'd leave the door unlocked so that no one would be denied access. 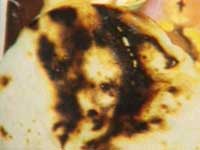 Is That Jesus on another Tortilla?

HOUSTON – A woman who recently lost her mother is finding peace – in a tortilla.

Maria de los Santos Rodriguez' said a few years ago, her mom saw the image of Jesus in a homemade tortilla. So she kept it with her, by her bed as she died from cancer.

Now, Maria said she wants other people to see the tortilla as a symbol of something sacred that is always visible to those who look.

"In everything you just have to stop your busy world and pay attention, that's all," she said.

Maria said the tortilla began to crumble, shortly after her mother's death.

LMAO! Ok, on the first one I don't see anything but a tortilla. The second one kind of reminds me of Bob Marley.

The first thing I saw when I looked at that one is "Wow! It's Alan of Meet an Atheist!"

No slander intended bro! I've NO idea why I saw such. lol!

AHAHAHAHAHAHA! Michael...the bottom tortilla looks like "bomb-turban Muhammad! LOL! That is too funny!

last pic looks like brandon lee in the crow