After disaster stikes, many god believers become even more delusional

First of all, I want to say that the earthquake disaster is horrific, and I encourage all to donate whatever you can to whatever charity you choose to help the victims of the quake get clean water, food,clothing and medical care. 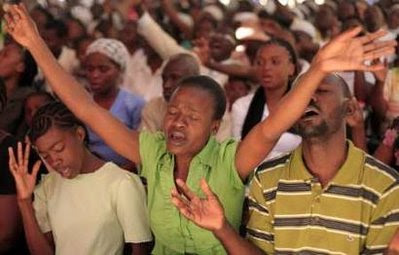 It happens everywhere in the world where there are god believers in times of disaster. They say that their god brought this upon them, that their god saves some and brings miracles of survival to others, lets some come through it all unscathed while others perish. And while they fear this invisible entity for which there is no evidence of its existence, they also continue to praise their gods, even more likely to praise their gods in the worst of times.

“Why give thanks to God? Because we are here,” Toussaint said. “We say ‘Thank you God.’ What happened is the will of God. We are in the hands of God now.”

It’s mind boggling how these people can still cling to the idea that there is some huge invisible overlord who wills disasters and the deaths of thousands in a matter of minutes. And even more puzzling is how can they still praise this sort of being and call him “good”!

At the roofless cathedral, elderly women worried the beads of their rosaries and prayed for the intervention of Our Lady Of The Ascension, to whom the 81-year-old church is named.

This being they follow is so horrible they must beg via another magical being for “intervention.”

Then you get the “end of times” bullcrap that we so often hear from the superstitious folks:

An apparently demented elderly woman began preaching on the sideline of the Mass: “Where is our justice? Now the palace of justice has been broken down … we are all infected by disease. The end is near.”

Must seem like it amidst all the rubble. I can understand the hopeless feeling of the victims.

And a woman was pulled alive, dehydrated but otherwise uninjured, from the ruins of the Montana Hotel, to the applause of onlookers.

The son of co-owner Nadine Cardoso said he could hear her voice from the rubble. Twelve hours later, with more than 20 friends and relatives watching, she was lowered from a hill of debris on a stretcher.

“It’s a little miracle,” her husband, Reinhard Riedl, said after hearing she was alive in the wreckage. “She’s one tough cookie. She is indestructible.”

But the rescue was bittersweet for Cardoso’s sister Gerthe: Rescuers had to abandon a search for her 7-year-old grandson after an aftershock closed a space where he was believed to be.

So an imaginary being, is sitting up in his other dimension looking down and snuffing out some men, women and children, and then allowing others to live as if he were sorting through beans for soup.

At the cathedral, the Rev. Toussaint described his own near-miraculous survival.

“I watched the destruction of the cathedral from this window,” he said, pointing to a window in what remains of the archdiocese office. “I am not dead because God has a plan for me.”

“What happens is a sign from God, saying that we must recognize his power – we need to reinvent ourselves,”

It’s pathetic how so many believe they are the special pet of an imaginary supernatural Sky Daddy, and that this being causes suffering and devastation to “recognize him”…wouldn’t just appearing to us all in the clouds above every nation so that every person on Earth can see him all at one time be a way to make us recognize his power if he exists? Why be cruel and destructive and violent when he has the power to show himself in a peaceful way? If a human parent tears apart the house and destroys things and kills, then that parent is taken away to jail, locked up and brought to justice…and the children taken away.

But so many think it is just fine for their god to behave in such a way that human beings would be arrested and probably executed for.
Posted by Stardust at 11:35 AM 12 comments: 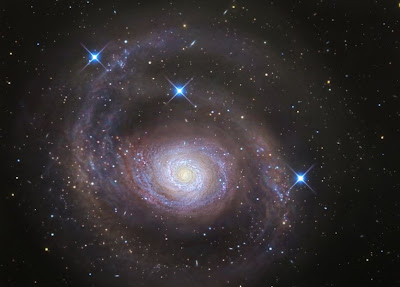 Explanation: Beautiful island universe M94 lies a mere 15 million light-years distant in the northern constellation of the hunting dogs, Canes Venatici. A popular target for astronomers, the brighter inner part of the face-on spiral galaxy is about 30,000 light-years across. Traditionally, deep images have been interpreted as showing M94's inner spiral region surrounded by a faint, broad ring of stars. But a new multi-wavelength investigation has revealed previously undetected spiral arms sweeping across the outskirts of the galaxy's disk, an outer disk actively engaged in star formation. At optical wavelengths, M94's outer spiral arms are followed in this remarkable discovery image, processed to enhance the outer disk structure. Background galaxies are visible through the faint outer arms, while the three spiky foreground stars are in our own Milky Way galaxy

Posted by Stardust at 9:08 AM No comments:

"There is no Big Brother in the Sky"

There is NO evidence that a grand puppetmaster exists. There isn't an omniscient, supernatural being who watches our every move. We are not slaves to some overlord in some other dimension, being given rewards for good behavior or punishment for being bad. Hitchens is correct, it is absurd to think that some supernatural being can read our minds, police our thoughts, and then dole out punishments for those thoughts that are not to his liking.

I wouldn't be so disrespectful as to send this video to people first like many of the religious people I know are intentionally or unintentionally sending me religious stuff, but for every evangelizing and religious propaganda email I get, I feel like sending this video response in return. (Then would have to deal with their persecution complex afterwards from some who say I am being disrespectful, or that I am going to hell, or whatever they want to make up in frustration because I cannot believe as they do and sent them something with my point of view.)

There is no Big Brother in the sky

The Great Flood (Christian Flood Myth)
Thanks to The Atheist Jew for this one.

LOL! My bet is that creationists don’t get through five seconds of it before they turn it off and start praying for us. Too funny. But the sad part is that this little cartoon presentation brings up some very good questions to consider before taking the flood myth literally. But sadly, most fundies choose to remain willfully ignorant.

Posted by Stardust at 2:03 PM No comments: 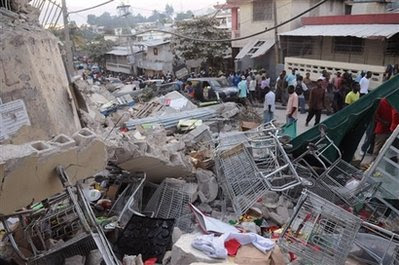 I’ve been reading the news and looking a the video footage and photos. Horrific. Just shows how vulnerable we are to natural disasters and nothing we can do to prevent them. But I am always amazed how humans from every walk of life and every belief come together in times like this.

Please donate to help the people of Haiti…every little bit helps. Here is a link to a reputable charity, or you may want to choose one of your own to help send aid for disaster relief.

Oxfam – Haiti Earthquake Relief
Posted by Stardust at 11:26 AM No comments:

The Mystery of the Fading Star 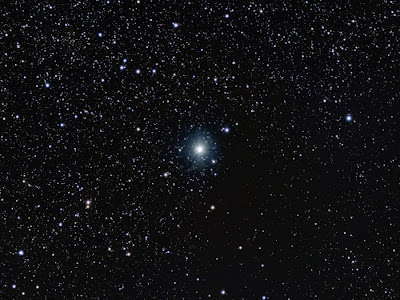 Explanation: Every 27 years Epsilon Aurigae fades, remaining dim for roughly two years before growing bright again. Since the 19th century, astronomers have studied the mystery star, eventually arguing that Epsilon Aur, centered in this telescopic skyview, was actually undergoing a long eclipse by a dark companion object. But the nature of the companion and even the state of bright star itself could not be pinned down by observations. Continuing to collect evidence, Citizen Sky, a team of professional and amateur astronomers, is studying the current eclipse of Epsilon Aur, reporting that it began in August 2009 and by late December had reached its deepest point. Epsilon Aur is now expected to remain dim for all of 2010, before rapidly regaining normal brightness in 2011. Meanwhile, recent infrared data from the Spitzer Space Telescope supports a model for the enigmatic system that identifies Epsilon Aur as a large but lower mass star near the end of its life, periodically eclipsed by a single star embedded in a dusty disk. The disk is estimated to have a radius of about 4 AU, or 4 times the Earth-Sun distance, and to be about 0.5 AU thick.

Happy New Year to all my friends in blogland. Thanks for taking the time to read and comment. I am going to try to start posting more often again.

Explanation: The graceful arc of the Milky Way begins and ends at two mountain peaks in this solemn night sky panorama. Created from a 24 frame mosaic, exposures tracking Earth and sky were made separately, with northern California's Mount Lassen at the left and Mount Shasta at the far right, just below the star and dust clouds of the galactic center. Lassen and Shasta are volcanoes in the Cascade Mountain Range of North America, an arc of the volcanic Pacific Ring of Fire. In the dim, snow-capped peaks, planet Earth seems to echo the subtle glow of the Milky Way's own faint, unresolved starlight.

Here is a link that Atheist Jew sent me to a game that Friendly Atheist posted on his blog that might make your gatherings with religious relatives a bit more endurable.

Posted by Stardust at 1:24 PM No comments: