The Galactic Center in Infrared from 2MASS 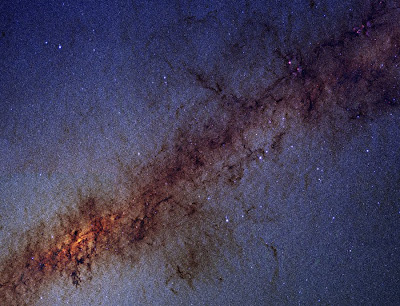 Explanation: The center of our Galaxy is a busy place. In visible light, much of the Galactic Center is obscured by opaque dust. In infrared light, however, dust glows more and obscures less, allowing nearly one million stars to be recorded in the above image. The Galactic Center itself appears glowing on the lower left and is located about 30,000 light years away towards the constellation of Sagittarius. The Galactic Plane of our Milky Way Galaxy, the plane in which the Sun orbits, is identifiable by the dark diagonal dust lane. The absorbing dust grains are created in the atmospheres of cool red-giant stars and grow in molecular clouds. The region directly surrounding the Galactic Center glows brightly in radio and high-energy radiation. The Galactic Center is thought to house a large black hole.

Posted by Stardust at 3:33 PM No comments:

Vatican reaches out to atheists/agnostics?

The pope and these creepy ghouls at the Vatican are claiming they want to “improve he church’s relationship with non-believers”, but as we all know, what this really is is a sneaky, underhanded attempt to convert us and bring what they perceive as lost sheep back into the fold. Well, I say, no thanks!

The Vatican is planning a new initiative to reach out to atheists and agnostics in an attempt to improve the church’s relationship with non-believers. Pope Benedict XVI has ordered officials to create a new foundation where atheists will be encouraged to meet and debate with some of the Catholic Church’s top theologians.

But the ones who can really make points and take the church theologians to task, like Christopher Hitchens and Richard Dawkins, will not be invited.

The Vatican hopes to stage a series of debates in Paris next year. But militant non-believers hoping for a chance to set senior church figures straight about the existence of God are set to be disappointed: the church has warned that atheists with high public profiles such as Richard Dawkins and Christopher Hitchens will not be invited.

“We, as believers, must have at heart even those people who consider themselves agnostics or atheists,” he said. “When we speak of a New Evangelization, these people are perhaps taken aback. They do not want to see themselves as an object of mission or to give up their freedom of thought and will. Yet the question of God remains present even for them, even if they cannot believe in the concrete nature of his concern for us.”

And they still try, try, try to make it like we really do believe, we just don’t know it. If they were really truly interested in our viewpoints they would understand that the “question of God” is only present for us because god believers always have an underlying evangelistic plot to bring us to their beliefs. Well, Dawkins and Hitchens or not, we will still ask the difficult questions…the first one being why the hell don’t you get your own house in order before attempting to reach out to anyone?

Dark Filament of the Sun 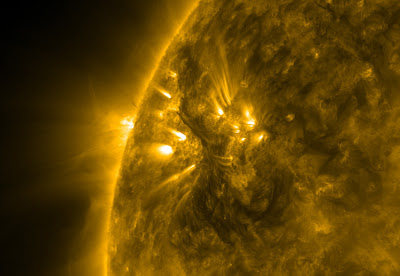 Explanation: Suspended by magnetic fields above a solar active region this dark filament stretches over 40 earth-diameters. The ominous structure appears to be frozen in time near the Sun's edge, but solar filaments are unstable and often erupt. The detailed scene was captured on May 18 in extreme ultraviolet light by cameras on board the Solar Dynamics Observatory. While the cooler plasma of the filament looks dark, hotter, brighter plasma below traces magnetic field lines emerging from the active region. When seen arcing above the edge of the Sun, filaments actually look bright against the dark background of space and are called prominences.

Posted by Stardust at 6:11 PM No comments:

Clouds and Stars over Cotopaxi Volcano in Ecuador 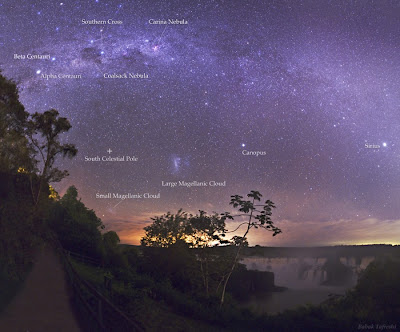 Explanation: The arc of the southern Milky Way shone brightly on this starry night. Captured on May 4, in the foreground of this gorgeous skyview is the rainforest near the spectacular Iguaçu Falls and national park at the border of Brazil and Argentina. Looking skyward along the Milky Way's arc from the left are Alpha and Beta Centauri, the Coalsack, the Southern Cross, and the Carina Nebula. Sirius, brightest star in planet Earth's night sky is at the far right. Brilliant Canopus, second brightest star in the night, and our neighboring galaxies the Large and Small Magellanic clouds, are also included in the scene. For help finding them, just slide your cursor over the image. Much closer to home, lights near the center along the horizon are from Argentina's Iguazú Falls International Airport. 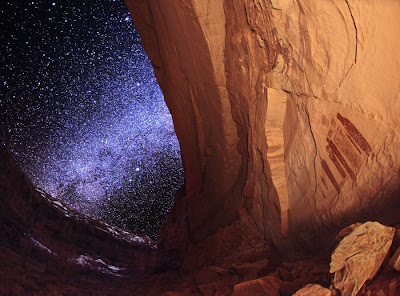 Explanation: Long before Stonehenge was built, well before the Dead Sea Scrolls were written, ancient artists painted life-sized figures on canyon walls in Utah, USA -- but why? Nobody is sure. The entire panel of figures, which dates back about 7,000 years, is called the Great Gallery and was found on the walls of Horseshoe Canyon in Canyonlands National Park. The humans who painted them likely hunted Mammoths. The unusual fuzziness of largest figure led to this mural section's informal designation as the Holy Ghost Panel, although the intended attribution and societal importance of the figure are really unknown. The above image was taken during a clear night in March. The oldest objects in the above image are not the pictographs, however, but the stars of our Milky Way Galaxy far in the background, some of which are billions of years old.

I apologize for not keeping up to date with comment moderation. I will try to do a better job at checking my queue. Thanks for reading and taking the time to comment here.
Posted by Stardust at 4:56 PM No comments:

"We either have free speech or we do not."

Swedish cartoonist Lars Vilks, who sparked controversy by drawing Prophet Mohammed with the body of a dog, was physically attacked on Tuesday while giving a lecture at the university of Uppsala, north of the Stockholm.

“The man was sat in the first row and suddenly he rushed at me. He punched me in the head and I lost my glasses,” said Vilks, adding that at the very most he was “a little bruised”.

The Muslims who showed up to protest knew ahead of time what the lecture was going to be about. Why attend if you know that what is going to be shown will offend you? Because, they don’t want anyone insulting their imaginary friend. Nevermind that Vilks spent time making fun of other religions. That does not matter to the protesters, because they believe that Islam is the only “true beliefs” and if no one else protests so violently, well…that just proves to them that Christianity, Buddhism, and all other religions are untrue but Mohammad and Islam are true and according to extremist Muslims, the right to free speech does not apply to Islam.

I was a bit frustrated to see Swedish non-Muslims just sit there there doing nothing at all during the whole ordeal. No one stood up in defense of free speech. It’s like our friend Pat Condell says, people are afraid to stand up to Muslims because of the risk of violent retaliation. The actions against Vilks shows that the fear is not unjustified. Because of the violent threats by Muslim extremists (which are carried out all too often), groups and organizations choose to just back down and let them have their way.

For Mr. Vilks, who has booby-trapped his own house and says he sleeps with an ax beside his bed, the right to unfettered speech – regardless of whether it offends Muslims – is a point of principle. “This must be carried through. You cannot allow it to be stopped,” he told the Associated Press, saying he wouldn’t hesitate to give the address again.

But the university apparently disagrees. Officials said they would “not likely” invite Vilks again because of the incident. In some quarters, the university’s reponse is adding to concerns that violence and threats from some members of the Muslim community are effectively muzzling free speech.

Earlier this year, the Metropolitan Museum of Art pulled a collection of art of Mohammed to avoid offending Muslims, who believe that the depiction of any of the prophets is a form of idolatry.

And Brandeis University professor Jytte Klausen says that Yale University Press prohibited her from using several 2005 Danish newspaper caricatures depicting Mohammed with a bomb on his head in her book “The Cartoons That Shook the World.”

“When it comes to depicting the Prophet, this has nothing to do with social issues or integration,” says Professor Klausen. “This is about a political movement by sectarian groups where [depicting Mohammed] has now become a primary trigger for political contention. The university pretty much told [Vilks] to shut up and go talk somewhere else, and I find that reaction very dangerous and problematic. It means that the extremists have achieved what they wanted.”

Here is the video of what happened after the attack on Vilks: