Is this anything new we didn't already know???

Have these people been living under a rock the past couple of decades? 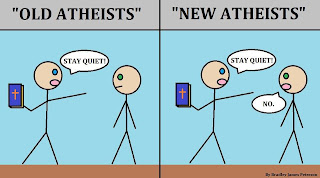 More and more atheists are done with standing in the background, biting our tongues while giving religious folks the “respect” to proselytize, evangelize, preach, badger, and interject their beliefs into our secular schools and government (and even our personal space). The time has arrived when atheists are finally speaking up loudly and firmly — we have had enough! Sitting back and being polite has gotten us nowhere except in the mess we now find ourselves in the political realm (generally the Republicans, though the Democrats don’t have a chance without some form of sky daddy beliefs). Fundamentalist Christians are running rampant throughout our local, state and Federal government. Being “tolerant” has only encouraged the willfully ignorant to try and take over and attempt to turn this free nation into an intolerant theocracy where homophobia is rampant, where women do not have a say about their own health and sexual issues, and those who are not Christian are considered to be unpatriotic and a threat to “Christian values”.

As stated in Wikipedia:

“New Atheism is the name given to the ideas promoted by a collection of 21st-century atheist writers who have advocated the view that “religion should not simply be tolerated but should be countered, criticized, and exposed by rational argument wherever its influence arises.”

When an atheist speaks up, especially when she or he is making a point that a believer cannot provide adequate argument against, they go into persecution mode and start the name calling…”angry atheist” being one of the most common accusations. “You’re so angry, why are you so angry? What has happened in your life to make you so angry against God?”

And when we try to explain that it is THEIR intolerance and their pushiness and attempt to assimilate that we disagree with, the persecution mode kicks on in their brains and their ears close and they don’t want to hear anything that might put a seed of doubt into their “faith”.
It’s a free country…people can believe whatever they choose to believe. But when those beliefs are being forced upon others, when that faith causes discrimination and oppression of others, when that faith interferes with the principles this country was founded on and interferes with the freedoms and happiness of others, then those believers need to be put in their place. It’s time to say ENOUGH.
Posted by Stardust at 12:43 PM No comments: