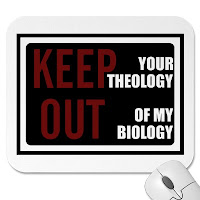 We could all use a little bit of good news these days, and this news gives me some hope that maybe many in the red states aren’t that backwards after all.

By a vote of 8-4, the state’s Textbook/Media/Library Advisory Council voted to support biology textbooks that uphold sound science and do not allow fundamentalist religious concepts to interfere.

For once, Louisiana has provided a glimmer of hope that maybe it no longer wants to be a science-education laughing stock.

Sadly though, there were still a third of the votes in favor of adding creationism to science textbooks. That is still too big of a percentage in favor of superstition being taught as reality in this day and age.

“There is no major research university in this country that teaches intelligent design or anything like that. It is simply not science,” Kevin Carman, dean of the LSU College of Science told the AP. “We need our textbooks to be focused on what is scientifically accurate and not religion.”

Could officials in Louisiana finally be ready to listen to the experts, instead of Religious Right zealots? We really hope so – but it is probably too soon to call.
In any case, we’ll gladly accept this win.

This is quite amusing. We’ve heard these “loving Christian messages” before, but very funny the way Dawkins presents them.

The Religious Right is feeling pretty empowered right now after their victory taking control of the House. They are most assuredly going to insist on action in their favor to controversial social issues. Screw the economy and getting people back to work, the pushing will start for creationism taught in public schools, “faith-based” hiring bias, laws allowing electioneering by churches, “Christian nation” resolutions and other measures that undercut church-state separation.
AU’s Barry Lynn states, ““Americans did not vote to stoke the fires of the culture war, but they may have done so inadvertently.”
Election Turned On Economic Issues, But Constitution May Suffer Collateral Damage, Says Americans United

Lynn noted that the Religious Right remains a potent political force in some situations. In Iowa, for example, a concentrated campaign by the Family Research Council, the American Family Association and their allies resulted in the ousting of three state Supreme Court justices who voted in favor of civil marriage rights for same-sex couples.

“Church-state separation is going to be under sustained fire for the next two years in Congress and in many state legislatures,” said Lynn. “Religious Right leaders are re-energized by the election results, and they are going to want action. Those of us who believe in individual freedom and equality are going to have our hands full.”

We most certainly are. AU is going to need whatever help we can give them. Click here to make a donation and give your support:
Americans United for Separation of Church and State
Posted by Stardust at 5:32 PM No comments: 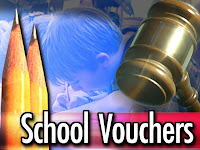 D.C. Parents for School Choice issued a statement yesterday claiming that Tuesday’s election results will increase the chances of continuing a District of Columbia program that funnels federal taxpayer dollars to religious education. “Our representatives have the opportunity to right one of the most severe wrongs of the past two years — the elimination of the [Opportunity Scholarship Program],” said Virginia Walden Ford, the group’s executive director. “The time has come for our new Congress to send a clear message to D.C. parents — that their needs will no longer fall on deaf ears in the highest corridors of power.”

The D.C. voucher program was pushed through Congress by the George W. Bush administration. It passed the House of Representatives by a single vote in 2004 and cleared the Senate only as a result of a procedural move.
The scheme paid up to $7,500 per student for tuition at religious and other private schools and was supposed to be a five-year experiment. The “experiment” was a failure, and after it expired in 2008, Congress limited participation to students already receiving a voucher. No new students were permitted to enter the program – a compromise supported by President Obama.

But despite this compromise, a few members of Congress have sought to reauthorize and expand the program so new students can be admitted. So far, Americans United and our allies have succeeded in stopping these plans.

Unfortunately, it looks like we may have an uphill battle to keep it that way.
D.C. Parents for School Choice said yesterday that it would be mailing packets of information about the voucher program to newly elected House members and senators this week.

The information that will probably be left out of the packets include:

* Approximately 82 percent of D.C. voucher students attended religious schools in 2009, according to the U.S. Department of Education.
* In its final report on the program, the U.S. Department of Education found no significant improvement in the reading and math scores of students participating in the D.C. voucher program.
* Studies have also shown that D.C. vouchers have no effect on student motivation, engagement and perceptions of safety. In fact, many voucher schools do not provide key services that public schools do.
* A 2007 Government Accountability Office report found participating private schools lacked occupancy permits and employed teachers without bachelor’s degrees.

AU’s Sandhya Bathija states, “Voucher boosters are blind to this reality. And they want Congress to be, too.” And since the House is made up of mostly bible thumpers, I am sure they will have their blinders on to the facts.
Posted by Stardust at 5:29 PM No comments: