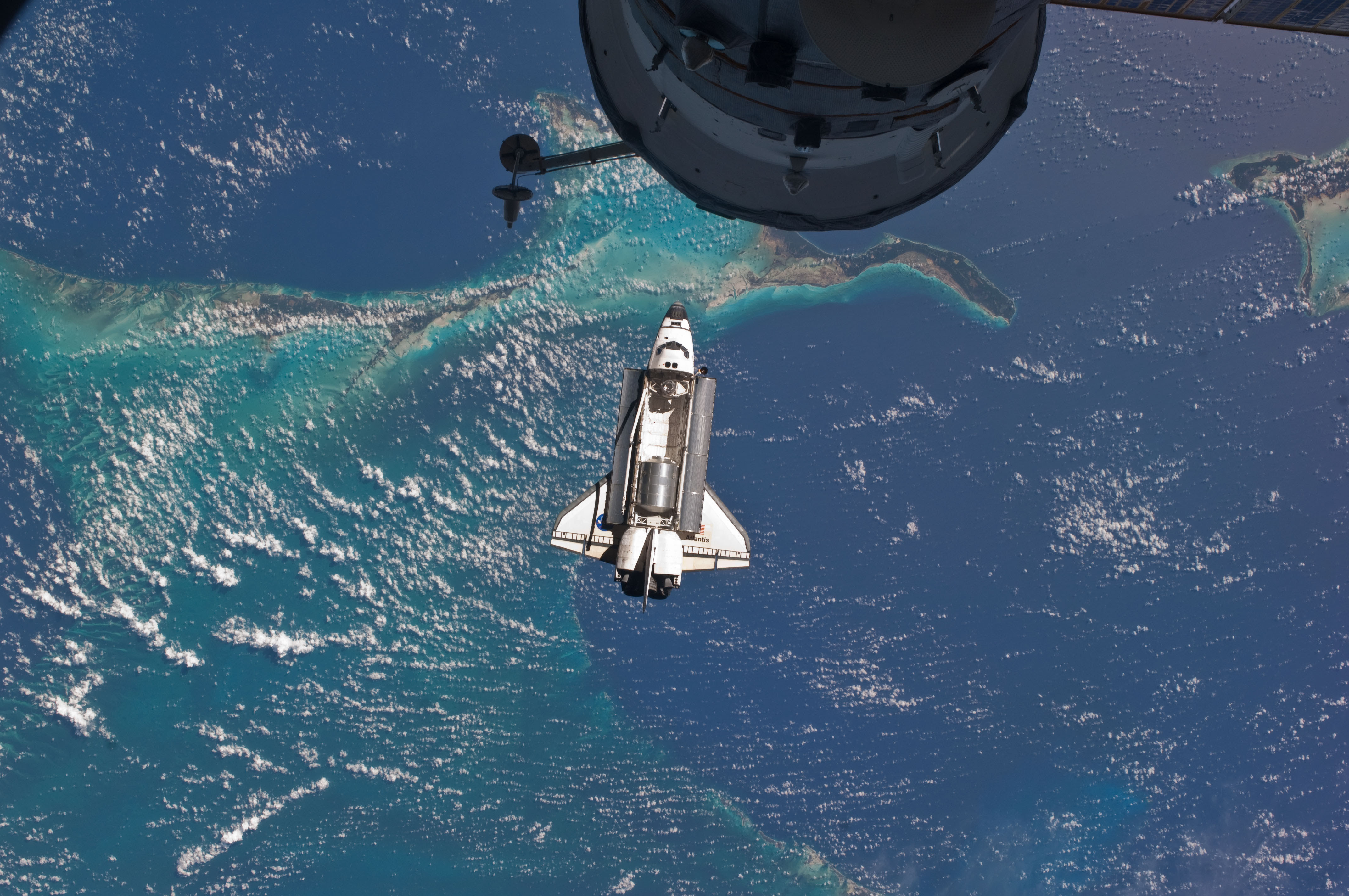 Image Credit: ISS Expedition 28 Crew, NASA
Explanation: For the last time, the US Space Shuttle has approached the International Space Station (ISS). Following a dramatic launch from Cape Canaveral last week that was witnessed by an estimated one million people, Space Shuttle Atlantis on STS-135 lifted a small crew to a welcome rendezvous three days ago with the orbiting station. Although NASA is discontinuing the aging shuttle fleet, NASA astronauts in the near future will be able to visit the ISS on Russian space flights. Pictured above, Atlantis rises toward the ISS with its cargo bay doors open, showing a gleaming metallic Raffaello Multi-Purpose Logistics Module. Over 200 kilometers below lie the cool blue waters of planet Earth. The much-anticipated last glide back to Earth for the Space Shuttle is currently scheduled for next Thursday, July 21.
Posted by Stardust at 3:49 PM No comments:

While some of these threats may just be trolls, there are many god botherers who really believe that atheists are deserving of being killed for our non-belief. I have seen people raised in rational, loving homes turn into gay-phobic, gun-toting, literal Bible-believing crazy ass lunatics who seem like they would love to shoot the people who refuse to have an imaginary friend called God. I have lost count of the number of posts and threads I have read which contain  these sentiments from those who call themselves “true Christians.”  Some “moderate” Christians in these threads point out that the violence promoters represent only a small minority of so-called Christians who make verbal death threats to non-believers and others who they deem (based on their ancient book of barbaric stories and fables) deserving of harsh punishments and death. But the moderates believe in the same book, and many believe in the same hell and that we are deserving of eternal torment as much as the fundamentalists do.

FOX News readers on Facebook started going off after Blair Scott, Communications Director for American Atheists, appeared on America Live with Megyn Kelly. Blair reports that when he returned home from his local FOX station for the interview that his voice mail was full of messages and his inbox had almost 200 hateful messages. “I can always tell when someone from American Atheists is on FOX news, because my Inbox explodes with hate email,” said Blair.
We can talk about the issues about this, but our friend William Hamby has put it well over at the Examiner.

Moderators on FOX News’ Facebook page had been trying diligently to delete the violent threats, but not before they were screen-captured by a diligent American Atheists member named Robert Posey.


Here are the screen captures of the death threats and threat of violence posted against atheists. We have left their screen names in place. If you’re devoted enough to make the death threat then you should be devoted enough to have your name attached to your hatred. How many did FOX News delete before they could be captured? There are over 8,000 comments on their post related to Blair’s appearance on FOX News.

Fox News can hardly keep up with deleting the vitriol. Moderates state that they denounce the death threats and verbal or any violence against atheists and others, however, they still believe we are deserving of some sort of violent repercussions from their imaginary friend….for simply not believing in it/his/her existence. All believers in the God of Abraham learn from a young age that those who hold beliefs different from their own are somehow flawed, evil, to be pitied and “prayed for”. They are taught that there is a place of eternal torment and torture and suffering for us. And by believing such nonsense is one step away from supporting the folks who would have us killed and justified as some sort of “supreme justice”.

These threats are not to be shunned or taken lightly, especially in these times when there are so many “Tea Baggers” and fundamentalist nutjobs working hard to seize control of our democratic society and turn it into an oppressive, hateful, bigoted, unreasonable, theocracy. Just look at the “war” that is going on in our government as of right now. Call me a pessimist, but I have a bad feeling things will only get uglier before they get better.
Posted by Stardust at 3:36 PM 4 comments: