A Sun Halo Beyond Stockholm 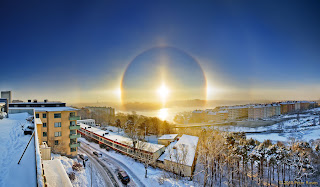 Credit & Copyright: Peter Rosén
Explanation: What's happened to the Sun? Sometimes it looks like the Sun is being viewed through a large lens. In the above case, however, there are actually millions of lenses: ice crystals. As water freezes in the upper atmosphere, small, flat, six-sided, ice crystals might be formed. As these crystals flutter to the ground, much time is spent with their faces flat, parallel to the ground. An observer may pass through the same plane as many of the falling ice crystals near sunrise or sunset. During this alignment, each crystal can act like a miniature lens, refracting sunlight into our view and creating phenomena like parhelia, the technical term for sundogs. The above image was taken last year in Stockholm, Sweden. Visible in the image center is the Sun, while two bright sundogs glow prominently from both the left and the right. Also visible is the bright 22 degree halo -- as well as the rarer and much fainter 46 degree halo -- also created by sunlight reflecting off of atmospheric ice crystals.
Posted by Stardust at 7:50 PM 3 comments:

Now this would be something amazing to see! 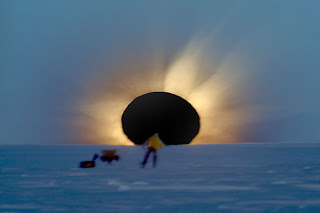 A Total Eclipse at the End of the World Credit & Copyright: Fred Bruenjes (moonglow.net)


Explanation: Would you go to the end of the world to see a total eclipse of the Sun? If you did, would you be surprised to find someone else there already? In 2003, the Sun, the Moon, Antarctica, and two photographers all lined up in Antarctica during an unusual total solar eclipse. Even given the extreme location, a group of enthusiastic eclipse chasers ventured near the bottom of the world to experience the surreal momentary disappearance of the Sun behind the Moon. One of the treasures collected was the above picture -- a composite of four separate images digitally combined to realistically simulate how the adaptive human eye saw the eclipse. As the image was taken, both the Moon and the Sun peaked together over an Antarctic ridge. In the sudden darkness, the magnificent corona of the Sun became visible around the Moon. Quite by accident, another photographer was caught in one of the images checking his video camera. Visible to his left are an equipment bag and a collapsible chair.
Posted by Stardust at 7:46 PM 1 comment:

Tucson, Ariz. – United in grief over the Arizona mass shooting, Tucsonans and their sympathizers accomplished what others could not: run the controversial Westboro Baptist Church out of town.

Members of the church have protested outside military funerals across the United States as they attempt to spread their message that America is being punished for its growing tolerance of gay rights. But in Tucson, protesters did not show up at the first two funerals for shooting victims – held for 9-year-old Christina Green and US District Judge John Roll.
Instead, the Topeka, Kan., church will take to the airwaves. In exchange for canceling its planned pickets at the funerals of the six shooting victims, the church announced, it will get air time on two radio shows.

Shirley Phelps-Roper is expected to get 30 minutes of air time on a Phoenix talk show hosted by Steve Sanchez. And on Monday, the nationally syndicated Mike Gallagher show will give an hour to Ms. Phelps-Roper.

Therefore, they really aren’t keeping them out of town, just away from the funerals of those victims who lost their lives in Tuscon at the hand of a mentally-disturbed individual.
What’s kind of interesting is that Miss Shirley won’t be able to just simply sit and spew her hateful bullshit for an hour:

Phelps-Roper won’t simply have an open mic, he notes. She will be debating Dinesh D’Souza, president of The King’s College in New York City and author of “What’s So Great About Christianity.”

If they don’t have a good moderator, all that will happen is that this bitch will outshout D’Souza with her screeching voice and babble on with her nonsense about her evil god who kills soldiers and causes bad stuff to happen because there are gays in the world. If there is a god with such powers and he hates the gays he created, then why doesn't this god just eliminate what he doesn't like? No, this god, they say, kills soldiers who are protecting their country, kills children who are just learning about life and many of whom don't even know about sex or sexuality yet, and kills whoever he feels like just because he doesn't like something about his own creations. Makes ZERO sense.
We have a society where people must be silent in movie theaters and observe the no talk rules in town meetings, classrooms, courtrooms, etc, but to demand silence during funerals is to be in violation of free speech. There are times when one must follow the rules to shut the hell up.
Posted by Stardust at 7:38 PM 1 comment:

Hitchens on Women and Religion

Once Western women come to understand that men have used and still use religion to control and keep women “in their place”, I find it puzzling why most women still cling to primitive Biblical beliefs despite modern feminist views and all that we have come to learn about cultures, customs and beliefs around the world throughout time. Why would a woman even find the Christian version of a god comforting when the Bible is full of hundreds of passages which promote the oppression of women and promote the opposite of feminist views and equality to their male counterparts. The same for those whose ancestors were slaves and held in bondage and all justified with Biblical passages. How can they find this religion and this god who condones slavery to be comforting if they have read and understood their religious texts at all? As a female ex-Christian who finally “saw the light” in my early 30s, I can’t see why most women wouldn’t be atheist.
Here is Christopher Hitchens discussing women and religion:

Posted by Stardust at 7:31 PM No comments: 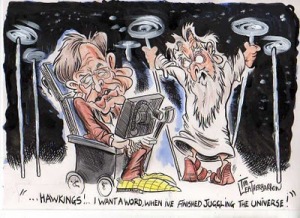 From the top church officials at the Vatican, to the obscure fundamentalist believers, god-botherers continue to make up stories about how their imaginary friend created everything while offering no evidence what-so-ever to support their wild claims — except to offer their ancient mythology book written by ignorant humans centuries upon centuries ago (and of which provides zero scientific or any supporting evidence for the many claims made by all these denominations of Christianity that their god zapped us all into being).


We have this story recently from Reuters:
God was behind Big Bang, universe no accident: Pope

God’s mind was behind complex scientific theories such as the Big Bang, and Christians should reject the idea that the universe came into being by accident, Pope Benedict said on Thursday. “The universe is not the result of chance, as some would want to make us believe,” Benedict said on the day Christians mark the Epiphany, the day the Bible says the three kings reached the site where Jesus was born by following a star.

What does Pope Benny provide as supporting evidence for his claims?
(Cricket sounds)
The story continues:


Some atheists say science can prove that God does not exist, but Benedict said that some scientific theories were “mind limiting” because “they only arrive at a certain point … and do not manage to explain the ultimate sense of reality …”
He said scientific theories on the origin and development of the universe and humans, while not in conflict with faith, left many questions unanswered.

So, when Christians or other god believers have unanswered questions, what do they do? Yep, they make shit up and no matter what denomination, they all sound alike. Their reasoning is exactly the same.

“In the beauty of the world, in its mystery, in its greatness and in its rationality … we can only let ourselves be guided toward God, creator of heaven and earth,” he said.

In other words, they believe what they want to believe…without evidence, and the church leaders tell their flocks of sheeple that it is close-minded to question what the church leaders say is true. They say it and the masses are to believe it . . . unquestioningly.
Posted by Stardust at 11:03 AM 2 comments: