Culinary Iconography - Allah on an eggshell 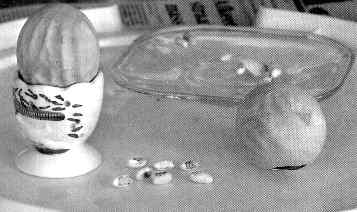 If we wait long enough, someone will come through with their delusional visions for our entertainment! Allah sure has a funny way of showing himself once again...this time coming out of a chicken's butt!

ALMATY (Reuters) - A chicken in a Kazakh village has laid an egg with the word "Allah" inscribed on its shell, state media reported Thursday.

"Our mosque confirmed that it says 'Allah' in Arabic," Bites Amantayeva, a farmer from the village of Stepnoi in eastern Kazakhstan, told state news agency Kazinform.

The news agency said the egg was laid just after a powerful hail storm hit the village.

Kazakhstan is a large, thinly populated Central Asian state where Sunni Islam is a dominant religion.