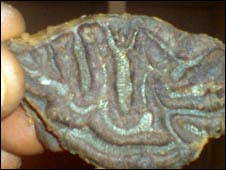 It's been awhile since I ran across a culinary iconography item. This one is from Nigeria where a diner in Birnin Kebbi noticed a pattern in his beef gristle that resembles the word 'Allah' in Arabic. Funny how these gods always leave their markings in food, tree bark, plant roots etc. (LINK: Allah seems to particularly love to write his name in the flesh of animals) but never speak or show themselves directly to human beings. Humans have such an imagination and will see anything to try to justify their beliefs. It isn't enough for them simply to believe and they show us how they have to reaffirm their beliefs repeatedly and in such absurd and bizarre ways. This story gives a whole new meaning to the phrase "mystery meat."

Diners have been flocking to a restaurant in northern Nigeria to see pieces of meat which the owner says are inscribed with the name of Allah.

What looks like the Arabic word for God and the name of the prophet Muhammad were discovered in pieces of beef by a diner in Birnin Kebbi.

He was about to eat it, when he suddenly noticed the words in the gristle, the restaurant owner said.

A search of the kitchen's meat revealed three more pieces which bore the names.

The meat was boiled and then fried before being served, owner Kabiru Haliru told newspaper Weekly Trust.

"When the writings were discovered there were some Islamic scholars who come and eat here and they all commented that it was a sign to show that Islam is the only true religion for mankind," he said.

[Why didn't someone ask him then what about Jesus sightings in fish sticks, etc?]

The restaurant has kept the pieces of meat for visitors to see.

Thousands of people have already gone to the restaurant to see them since they were discovered last week.

A vet told the newspaper the words "defied scientific explanation".

"Supposing only one piece of meat was found then it would be suspicious, but given the circumstances there is no explanation," Dr Yakubu Dominic said.

LINK: There IS an explanation. Coincidence that the beef gristle formed a pattern that might look similar to the letters in a word recognizable to only those who read Arabic. Human imagination does the rest. Like seeing familiar patterns in clouds passing overhead.
Posted by Stardust at 1:28 PM

Peace,
I know why they didnt speak of Jesus mark thing in a stick... or something because it is also a sign of Allah . And jesus was his prophet before Muhameed. He himself told there would be a comforter after you, but the Christians are pround. There are millions signs of Allah, my dear friend. just see
http://quranicverse99.tripod.com/pathtoparadise/id2.html
http://archive.muslimuzbekistan.com/eng/ennews/special/miracles/miracl10062002.html
http://www.islamcan.com/signsofallah/index.shtml

Please enbrace Islam like Yusus Estate( a well recognized Christrian preacher did) and there are contradictions in the bible( who wrote it men!! OMG men)
A sign of Koran written by God is that it was not learnt by anyone and humans cant write anything like it other than learning the art of writing it. Humans must learn!!
What did an Indian say when she reach the moon?
" The only place on earth more brighter .. was the holy city of Mekkah"
And of course the jews and Christian oh! oh!
Once you read this (Chriostian or jew) and dont beleive this your doom NOT MY FAULT!!

SEE YOU AT THE LAST DAY< IF ALLAH WILLS

AS both christians and muslims say
AMEN

Allah and the Quran are also written by human beings. Human inventions to control other humans. The "Signs" you see are just recognizable human imagery invented by humans. We see familiar patters in other things because of mind playing tricks on us.

Please do not come here with threats of your imaginary friend. If these gods were real they would come tell us themselves and not play games with hide and seek and find the image in beef and other things. That is ridiculous. If there were gods we would know without anyone even telling us. But we do not.

Gods are imaginary, Allah is imaginary. And if any harm comes to other humans it is always by the hand of other human beings who wish them harm. It is awful to hope for someone to suffer and to be tormented just because they do not believe what you do.

Alla...hu akbar!
Allah is the creato of this univers &
Al-Quran is the user manua to the human. and it guide you to live here in an smooth way.
wassalaam...!

Why does this creator just not show himself as he is instead of making his presence seen to only "true believers" via animal carcasses, dog poop and other ridiculous ways? This is only humans seeing what they want to see, that's all.

it seems like that u are a non believer..
what i have to say u is that "atleast think about where this ALL come from? "

I have thought about where it all came from. That is why we have Science, to try to learn about things we do not know instead of just making up the answers with our imaginations and leaving it at "god did it". That is very lazy. Just because you think something is magnificent doesn't mean it had to be created by a supernatural invisible being of your imagination. As for the iconography, human beings recognize patterns and tend to see familiar images in everyday objects, clouds, stars, woodgrain, rock formations. We are always looking for familiar symbols to relate to. Just because I see an image of something in an object or clouds, etc doesn't mean that image is coming from some big supernatural puppetmaster. There is no invisible being pulling the strings of billions of people. No evidence of that at all no matter how hard you try to imagine it.