Take a stand against child abuse 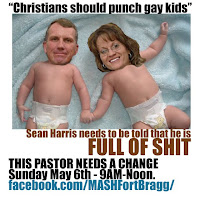 Most of you know the story about the NC pastor who encourages  parents to punch kids who show “effeminate” behavior and to crack their wrists and “butch” girls should be “reined in”.
American Atheist reports a protest against pastor Sean Harris tomorrow, May 6 in Fayetteville, NC.


Fayetteville, N.C. Police are expecting 500-600 people to attend our protest of the local pastor who told his congregation to ‘beat their gay kids.’ *shudder*
Are YOU too busy to take a stand against this monster? RSVP: http://www.facebook.com/events/305729822834613/
Are you too far away to attend? You can still help by sharing this and temporarily setting your facebook timeline cover photo to THIS picture:
http://freethoughtblogs.com/rockbeyondbelief/files/2012/05/2Sean-Harris-Berean-Baptist-punch-your-gay-kids-protest-profile-wide-851×3501.jpg

He is of course retracting what he had stated, but we know that he is just trying to save face in the media while still clinging to his bigoted beliefs. These people must be shown that we will not accept child abuse and discrimination in any way, shape or form.