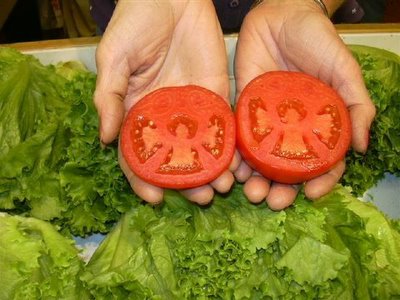 Angels in a tomato. Someone sent me this via an email forward and she was seriously overwhelmed spiritually! To me, if I look real close I see two circles at the top of the tomato halves making them look like Jack-o-lantern faces. Humans are imaginative, but when they take this stuff seriously, it's HILARIOUS. Another very funny food vision is JESUS IN A PANCAKE which has been put on auction on Ebay and you can read more over at Skeptico...Jesus or Captain Pugwash? You tell me.
Posted by Stardust at 5:23 PM

I just finished reading Michael Shermer's Why People Believe Weird Things. He argues that humans are pattern-seeking creatures, and we are so good at seeking patterns that we sometimes enforce patterns where there are none. It's this faulty thinking that results in people seeing the face of the Virgin Mary on cup-cakes or angles in tomotoes.

By the way, can I put a link on my site to your blog? I enjoy your posts, and I would like others (who visit my blog) to see yours.

Kevin
Memoirs of an ex-Christian

Sure Kevin, that would be great!

Did you hear about the "Virgin mary" people were seeing in a water stain under the viaduct off a Chicago expressway? They made a SHRINE there...people stopping to pray and leave candles and flowers? This caused many other people to swear at them and shake fists because it would snarl already heavy traffic congestion with them getting on and off at a little turn-out to see this "apparition"! Most people in chicagoland would gladly exchange religion for a clear drive to work!

Another point..it cracks me up that people are so "spriritually moved" that they auction off their prized possession on e-bay for hundreds and thousands of evil dollars.

That was a fantastic book, Kevin, and a good point you made. However, even though I understand the psychology behind our tendency to see patterns where they do not exist, I still find it hillarious. Great post, stardust!

And nice point 'bout the "value" of some folk's spirituality. {shakin'head}

I am thinking about making this a regular feature...there are so many visions in foods and other things it's scary! Some people want to make a buck, then there are others who really believe it like this lady who made a shrine in her shed for a tortilla that she believes has the face of Jesus on it. It's attracting tourists! Some people are so stupid!

Ok, am I the only one who can't see the Jesus in the pancake??
Very good point that Kevin makes. I see faces in my textured ceiling all the time. Once I watched a show that suggested every time you see a face in a pattern, it was the face of someone who just died. I saw this show when I was about 7 or 8. For years, I thought this was true. So sad... LOL!

Google "NunBun" - All one word.

Bongojava is a local establishment that baked a cinnamon bun that people said looked like Mother Teresa. They even market merchandise with the picture on it.

Recently, it was stolen (along with the custom display case) and they're offering a $5000 reward for its return.

The Nunbun is hilarious, isn't it? Imagine a cinnamon bun worth $5,000! I saw the holy mary on a grilled cheese sandwich that sold for a bunch of money not too long ago. Once I started looking around online I found all sorts of things. How about the mary holding baby Jesus honey mustard pretzel that sold for $10,600? The girl who found it in a bag of Rold Gold pretzels was so spiritually moved that she sold it to have money to buy herself a horse!
And then there is a chicken breast some guy says has the face of jesus on it. What a hoot this stuff is! I am definitely going to have to read the book Kevin recommends.

Yanno, I wish I still had that newspaper clipping I had saved from 1988 or 1989. It was a shot of a Pizza Hut billboard featuring a forkfull of spaghetti. People went nuts because they claimed they could see Christ's face in the lump of noodles hanging off the fork.

I saw something, all right. I saw a damn good pile of pasta. Damn, that's making me hungry. :D