Culinary Iconography - Allah on an Eggplant, Melon and a Bean 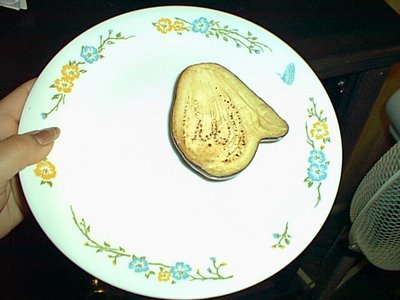 In March last year, a woman in Mendhasalis, India, sliced into an eggplant and found seeds spelling out "Allah" in Urdu script. Now, the vegetable is part of a shrine near her home, where some treat it as a religious icon.

Amazingly, this is not the first time an eggplant has been exalted. In 1990, Muslims in nothern England also reported finding "Allah" spelled out in the seeds of an eggplant, only this time it was written in Arabic.

"This clearly shows people that our god exists. It is a message to the nonbelievers," Abdullah Patel told Reuters, claiming that 4,500 people had visited his home within just weeks of the incident being reported.

In one more case of this food-of-the-gods phenomena, in 2002, the Jessani family of Mumbai (formerly Bombay), India, returned from the market with a potato shaped like the elephant-headed Hindu god Ganesha. They now welcome 60 to 70 pilgrims a day, eager to see this divine vegetable, according to local press.

What does this all say? Perhaps God is everywhere, and in some cases, he's fattening. 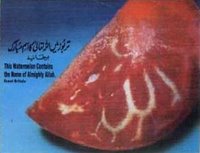 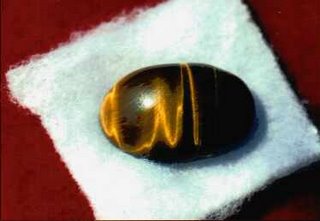 I see you still like my atheist blog marc. ;)

The people who think they see this shit don't think it's "fool hearty" and there seems to be a lot of them and all of them have some sort of superstitious belief in a supernatural entity.

I haven't come across any atheist iconography yet...at least none that take their "visions" as anything more than amusing coincidence ....interesting huh?

Great post, and I love your blog. Go over to my blog and read about the Virgin Mary on a grilled cheese sandwich who just fetched $28,000 on Ebay!

Jesus on Sheet Metal on ebay for 1,575 - looks like a casino wanted it:
http://cgi.ebay.com/Image-Of-Jesus-On-A-Piece-Of-Sheet-Metal-New_W0QQitemZ6257739218QQcategoryZ1447QQssPageNameZWDVWQQrdZ1QQcmdZViewItem

Anyone see the profile of Darwin in a coconut?

No BUT it was in the frying pan!
image at panda's thumb:
http://www.pandasthumb.org/archives/2005/11/breaking_news_d_1.html

One wonders what other more mundane things that are spelled out by vegetables go unreported or unnoticed.

If "This clearly shows people that our god exists. It is a message to the nonbelievers," then why don't nonbelievers ever find the blasted things?

I see the Invisible Pink Unicorn (Peace be unto Her) when I close my eyes. I'm sure she's there because I don't see anything (she's invisible, after all).

mindgames - LOL! Just checked out the Darwin image on a frying pan! LOL!