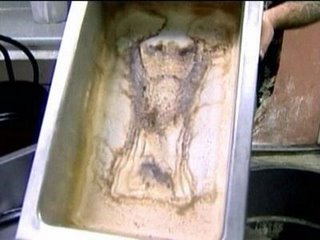 I'm impressed by the concept (and content) of your blog. But for "free thinkers", you mostly seem to be continuing tired old arguments about the lack of self-examination in religion.

What free thinking opinions, I wonder, would you form on the idea of... say... punching a monkey? I'm not getting a lot of support for the idea, and I'm struggling to find a forum that won't call me a monster.

Well, it depends if the monkey deserved it.

I think that image looks more like mohammed. If that restaurant was in an islamic country they would be guilty of idol worship and put to death.

Go ahead Evan, punch that monkey!

Love this comment by mexicandream on a forum I was reading:
What is wrong with some people? Jesus in a nacho pan?! How about less time looking for Jesus and more time making nachos. What the heck are they paying you for anyways?